We’re proud as can be to report that Trevor and Jaden were awarded their Eagle Scout – the highest rank Boy Scouting!

And the Eagle Scout Court of Honor went great.
When 6:00 rolled around there were only a handful of people (mostly those taking part in the program) plus our family and I thought that it would turn out to just be a quaint award ceremony after all. But then all of a sudden a ton of people started streaming in and more chairs were being set up. I don’t know how many people there were in all, but it filled the part of the cultural hall we were in very nicely. And I was told that the Eagle’s nest had about 35 men in it. What a great support for the boys!

And the awards ceremony went great! We had Ryan Marshall be the Master of Ceremonies and Cameron Stewart (YM Pres.), Denny Crockett, Pete Harmon, and Bishop Chris Call have a role in it. And they had great things to say. And when it came time for Trevor to award his Mentor pin, he got choked up giving it to Michelle. Jaden gave his to Ryan Marshall and he was flattered.

Then we showed the video I put together of the boys on their path from cubs to Eagle. I figure I spent about 15 hours putting it together. And when it concluded Trevor turned to me and gave me a big smile, a “knucks”, and a “good job dad”. Very nice. 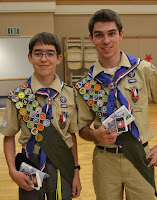 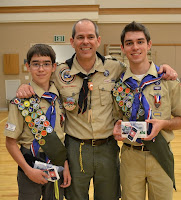 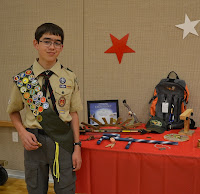